Over the next few months two ‘forty-something’ individuals will be taking on the Atlas challenge. We believe that if they both give it 100% then they can reach their fitness goals in 3-6 months – with a little help from their friends at Atlas Gym!

Hi, I’m Chris.  I’m a former gym-goer (ok, it was twenty years ago..) and over the last few years have succumbed to the dreaded middle-age beer gut.  I love my food and at the age of 42, still eat whatever I want, and as much as I want, just like I did when I was 18.  The trouble now is that my body is far less forgiving of this kind of lifestyle.

Back in the day (before family life etc.) and, I used to train every day.  I wasn’t particularly fit, but at that point my goal was to put on some muscle.  I’d even take weight-gain shakes to put on bulk I could turn into muscle.  No need for that now!   I have the bulk, and I’m just generally unhealthy.  I’m known at home and at work as a human dustbin, and as someone who does pretty much no exercise.  I look in the mirror and it’s not great, but what should I expect when I treat myself this way.  I feel like it’s time to get my act together, and get fit and healthy.  I have kids now, and it would be great to have as long as I can with them – and do my best to keep up with them in the park!

On the face of it, my goals are simple: lose some bulk around the stomach, improve my stamina, and be able to put my socks on without getting out of breath. :-/  Sounds straightforward but I know it won’t be.  I need to make this part of my general routine.  I have a busy life, with a high pressure job, kids to look after, spending quality time with my partner and playing guitar when I can fit it in.  The gym needs to fit in and I need to build a realistic routine – and stick to it!

Plan:  It starts tonight at Atlas Gym.  PT Jason has sent me a training plan which he will take me through next week.  Tonight will be sticking to things I know – old school training, but who cares, I’m doing it, and not putting it off a few more days.  I know I need to look at my diet too, but today, it’s all about the exercise.  Let’s do this!

Keep up with Chris’ progress on our social media: 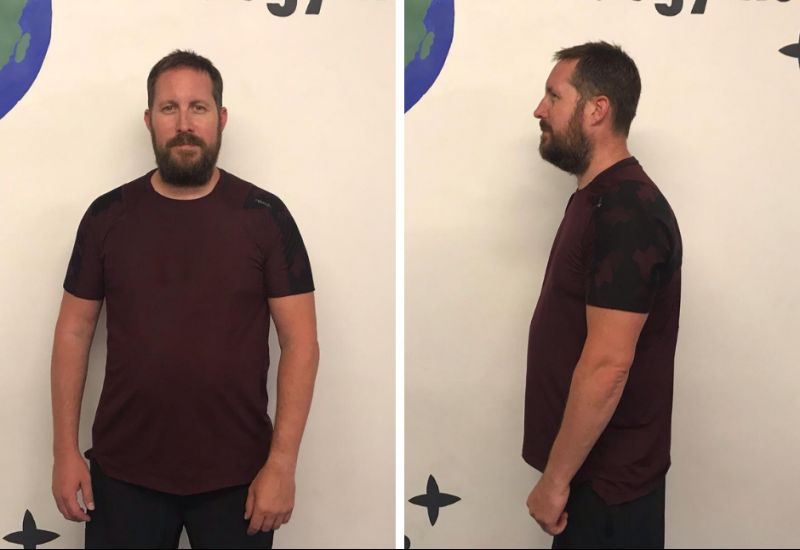 How has it been going?

So the journey has begun and I’m a few weeks into my transformation at Atlas Gym in Park Gate, Southampton.

I had a couple of sessions on my own before my consultation with personal trainer Jason (Jason runs Mofitness, a Southampton personal trainer based at Atlas Gym) and did my best to do the training plan he’d sent to me.  It’s fair to say I took longer than normal to get through the sessions because I wanted to make sure I knew exactly what I was doing.  A lot of the exercises are part of super-sets (one thing immediately after the other), so even just familiarising myself with where things were and mapping out the transitions were important.

It’s all about technique!

In the main, I got on pretty well, though there were a few things I’d never heard of (one-legged Romanian deadlift?!), so I substituted those with things I knew or took a look at trusty Google for help.  When I had the consultation we went through the techniques I wasn’t sure about.  Jason is a stickler for technique, but that’s what I needed.  When I trained years ago, I’d compromise the technique a bit to be able to lift more weight.  That’s not important to me now.  I just want to make sure I’m doing things right.  I seemed to pick things up quickly and he was pleased with my technique.

So that was the start, but how has it gone since?  Mixed, but generally really good.  I only say mixed because I haven’t been quite as often as I’d hoped, for various reasons.  As for the training, I’ve really enjoyed it.  The exercises are HARD, but each time I do them, I feel more comfortable and I’ve been able to either increase the reps or the weight.  The gym is great (see list of equipment here).  One of the things I love is that it’s always open.  Sometimes there is so much going on and I work in the centre of Southampton so I can’t get down to the gym until late, but that’s all good as it’s totally flexible.  It’s much quieter late at night, which I have liked, particularly whilst getting a feel for things.  That said, now I’m comfortable with the routine, the busier times have a great atmosphere.  There are a really nice bunch of people there doing a wide range of things.

Has it made a difference?

Have I noticed a difference in myself?  Well I wasn’t exactly expecting to be ripped after a few weeks, but I have seen an improvement.  After week one, I was keen to weigh myself and see what difference it had made.  I gained two pounds…  I put that down to muscle being heavier than fat.  That’s fair right?!  What I did notice, even in the first couple of weeks was a change to my body shape.  A bit less flab and a bit more tone.  It’s going to take time, but that was good to see.  The shame I felt previously when I looked in the mirror was starting to turn to encouragement.  Also, the weight has started to come down too and I seem to be less susceptible to junk food binges.  Less….

My focus for the next few weeks is to be more disciplined in going three times a week.  It’s so easy to make excuses, but I always kick myself the next day knowing I could have gone.  Summer holidays are over now, so everything is a bit more routine.  There is no reason I can’t do it.  Onwards and upwards! 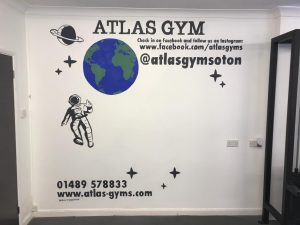 Atlas Gym decided it needed a bit of a makeover and reached out to Two Sisters to ask them to design a social media wall. 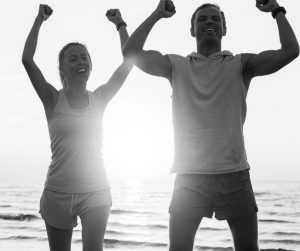 Top tips for working out in the heat

Sticking with your workout routine over summer can be hard – not only is the call of a pint in the pub garden a lot stronger when the sun’s out, it can be a worry to work out in the heat. 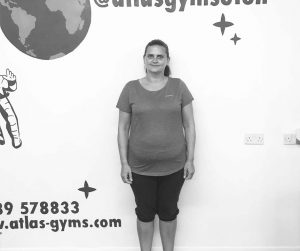 Over the next few months two ‘forty-something’ individuals will be taking on the Atlas challenge. We believe that if they both give it 100% then they can reach their fitness goals in 3-6 months – with a little help from their friends at Atlas Gym!

We are open 24/7 with trainers available at the following times:

We use cookies on our website to give you the most relevant experience by remembering your preferences and repeat visits. By clicking “Accept All”, you consent to the use of ALL the cookies. However, you may visit "Cookie Settings" to provide a controlled consent.
Cookie SettingsAccept AllRead More
Manage consent

This website uses cookies to improve your experience while you navigate through the website. Out of these, the cookies that are categorized as necessary are stored on your browser as they are essential for the working of basic functionalities of the website. We also use third-party cookies that help us analyze and understand how you use this website. These cookies will be stored in your browser only with your consent. You also have the option to opt-out of these cookies. But opting out of some of these cookies may affect your browsing experience.
Necessary Always Enabled
Necessary cookies are absolutely essential for the website to function properly. These cookies ensure basic functionalities and security features of the website, anonymously.
Functional
Functional cookies help to perform certain functionalities like sharing the content of the website on social media platforms, collect feedbacks, and other third-party features.
Performance
Performance cookies are used to understand and analyze the key performance indexes of the website which helps in delivering a better user experience for the visitors.
Analytics
Analytical cookies are used to understand how visitors interact with the website. These cookies help provide information on metrics the number of visitors, bounce rate, traffic source, etc.
Advertisement
Advertisement cookies are used to provide visitors with relevant ads and marketing campaigns. These cookies track visitors across websites and collect information to provide customized ads.
Others
Other uncategorized cookies are those that are being analyzed and have not been classified into a category as yet.
SAVE & ACCEPT